What Are the Big Three Animes, Why Are They So Popular, and Which One Is the Best?

Any person who enjoys watching anime should be familiar with the phrase “Big Three,” which describes the three anime series that were the most well-known and influential throughout the decade of the 2000s. These three young adult comics were adapted into anime at practically the same time, and while having developed in very different ways, all three of them left an indelible imprint on an entire generation. This post is going to be a love letter to a complete idea that not only inspired the world of anime in general, but also a whole generation of people all over the globe. Yours truly was a member of that generation, and it influenced an entire generation of people all over the world. 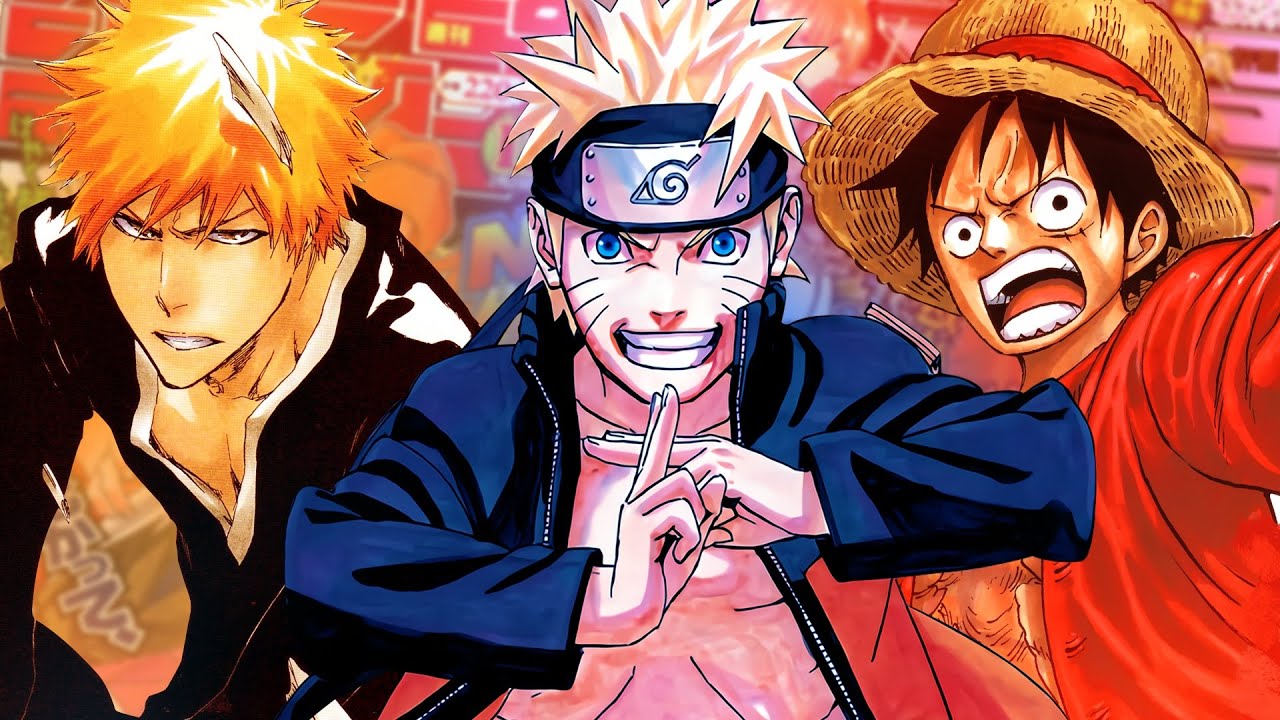 There were three big shonen anime series that debuted in the early 2000s, and they are collectively referred to as the “Big Three.” The works in question are titled Bleach by Tite Kubo, Naruto by Masashi Kishimoto, and One Piece by Eiichiro Oda. These three anime series changed people’s ideas about anime all around the world and helped make the whole genre popular throughout the globe, which increased the number of people who watched it and the amount of money it produced.

More information on the “Big Three” anime will be provided to you in the next sections of this page. We are going to spend some time discussing each of them, as well as answering some pertinent issues about their effect and the legacy they have left behind. The “Big Three” anime have, to a large extent, been responsible for shaping modern attitudes about the medium, and their historical significance is such that they unquestionably merit a whole page to themselves.

What three anime series are considered to be among the “Big Three?” 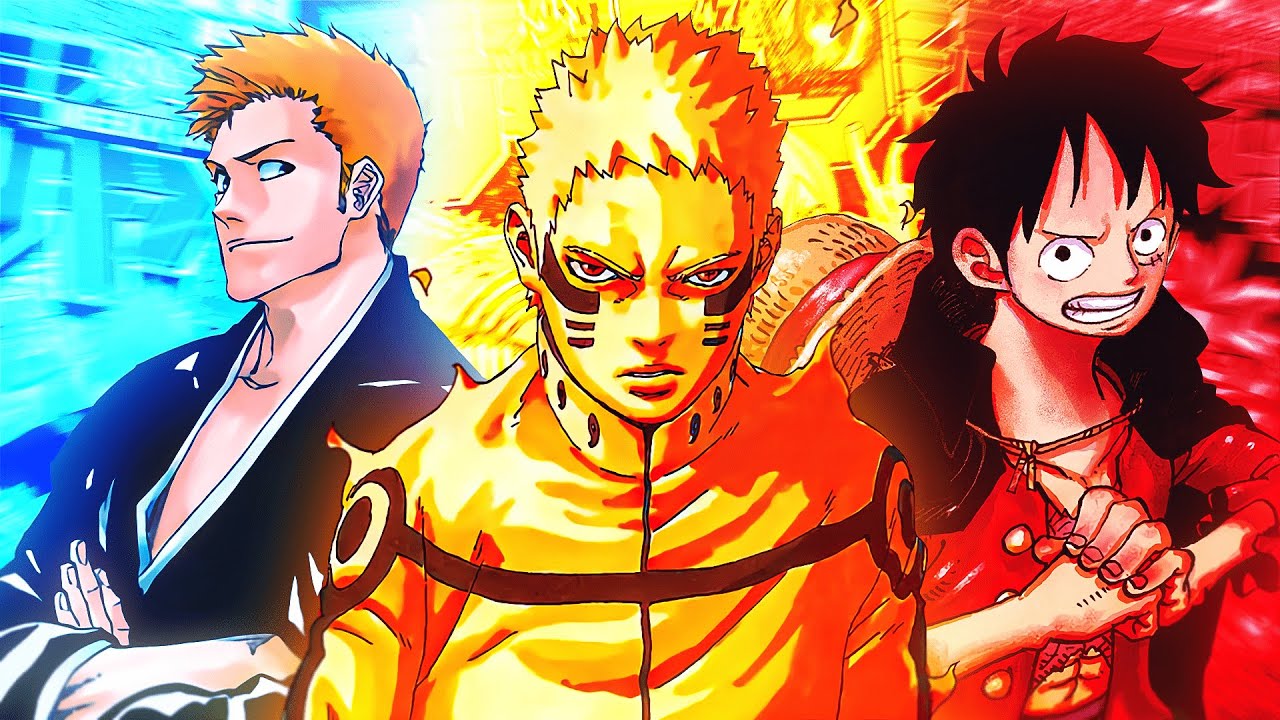 The three most popular anime series from the early 2000s are collectively referred to as the “Big Three.” They are the manga and anime series Bleach, Naruto, and One Piece. In the following paragraph, we are going to provide them to you.

Tite Kubo is the author and illustrator of the shonen manga that is known as Bleach. Between the dates of August 7, 2001 and August 22, 2016, it was serialized in the weekly Young Adult magazine Weekly Shonen Jump, which is published by Sheisha. As of November 4, 2016, it has been collected into 74 volumes. It is one of the best-selling manga in the world, with more than 120 million copies having been sold.

The year is 2001 and the setting is Japan, specifically the fictitious city of Karakura. Since he was a little child, Ichigo Kurosaki, who is now a senior in high school, has had the ability to see, hear, and physically interact with the souls of the departed. Following his run-in with a Shinigami named Rukia Kuchiki and the emergence of a creature known as a Hollow, his normal routine gets thrown for a loop one evening.

As a result of Ichigo’s actions, the Shinigami who came to defend him were hurt, therefore in order to rescue his family from having their souls consumed, Ichigo makes the decision to become a Shinigami himself. However, the transfer of authority, which was only meant to be temporary and in part, has been completed and will continue. Ichigo is pressured into taking on the duty for the mission that Rukia Kuchiki was assigned.

He hunts Hollows while defending souls. Beginning involves a sword chase for weak demonic spirits. After the first additional Shinigami appears, the storyline will become mystical-political. The starting sword clashes will become epic confrontations with weapons of astonishing and diverse capabilities and occasionally huge dimensions.

Studio Pierrot adapted the manga into a 366-episode anime that broadcast on TV Tokyo from October 5, 2004 to March 27, 2012. The anime finished before adapting the whole manga, although the last arc will premiere in 2022. The anime will resume with episode 367.

Masashi Kishimoto is the one who writes and draws the shonen manga that is known as Naruto. Between September 1999 and November 2014, the character Naruto appeared in the Weekly Shonen Jump publication of the Sheisha publisher. The collection is comprised of a total of 72 volumes. After finding popularity in manga form, Pierrot and Aniplex studios adapted it into an anime, which debuted on TV Tokyo on October 3, 2002. The animation was created by Pierrot and Aniplex studios. Naruto: Shippuden is an adaptation of the story’s second section, which was released in Japan under the same name.

Naruto is 12 when the narrative starts. Orphan and troublemaker, he’ll try everything to be noticed. His dream: to be acknowledged by his town as the finest Hokage. The nine-tailed fox demon bound inside him has inspired terror and loathing among the villagers, who no longer distinguish between Kybi and Naruto.

Naruto works hard to become genin, the first ninja degree. He eventually gets his Konoha forehead protector after failing the genin test three times. He subsequently joins Sakura Haruno and Sasuke Uchiha, who wants to avenge his family by murdering Itachi Uchiha.

Soon after, they meet their jnin (upper-class ninja), Kakashi Hatake. Naruto will receive the respect and devotion of the locals owing to the spectacular fights he wins against Konoha’s most fearsome adversaries.

Naruto is a best-selling manga and comic book, with over 250 million copies produced. Due to its popularity, animated feature films based on untold tales were developed between 2004 and 2015.

Monkey D. Luffy’s body becomes rubber when he eats a Devil Fruit. Luffy and his Straw Hat Pirates gang quest for “One Piece” to become the new Pirate King.

Toei Animation adapted the manga into an anime, which airs every Sunday in Japan. As of February 2022, there are over 1,000 episodes. The license comprises 15 films, 11 special episodes, 1 OVA episode, 4 books, 1 cookbook, more than 50 video games, more than 5,000 figurines, a restaurant, an amusement park, and a 2022 live-action series.

One Piece is the manga that has sold the most copies in the history of the medium. It is also the series that has had the most success in terms of sales for a single author anywhere in the globe. As of July 2021, the total number of copies in circulation of One Piece volumes was 490 million, with 400 million copies being sold in Japan and the remaining 90 million sold in the rest of the globe (42 countries).

Previous articleCandice Patton, The Flash Star, Didn’t Wanted to Appear on the Program Owing to Harrassments She Received Socially!
Next articleEverything you need to know about What If…? Season 3!